The Story of The DidjeriJew 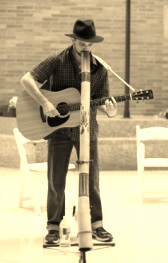 Photo by Shawn Hoke
As a young Ashkenazi growing up surrounded by the Aborigine tribes of Australia, Meyer Reuben (the DidjeriJew) was accustomed to being an outcast from early on. While the tribe circle-danced their praises to the Sun and studied the Dreamtime (a Golden Era in Aborignal mythology, and it's influence on the second life you live whilst sleeping), he often had to stay at home- practicing his Hora and studying Torah.  As a young boy however, Meyer was always up for an adventure; he would sneak out when his parents weren't watching him to join the tribal festivities. This went on for years until one day, his mother caught him coming back home covered in Moiety face paint, symbolic of Meyer's acceptance into the tribe.

Furious with their son's actions, Meyer's parents forbade him from rejoining his friends and neighbors in all future Aborigine customs. Meyer however, had other plans. One evening while his parents slept, Meyer snuck out of the house to visit the local tribe leader, Koontama. Koontama first scolded Meyer for disrespecting his parent's orders, but was soon enthralled in learning of his wishes to unite their cultures. Koontama meditated on Meyer's speech for a moment, rose from his seat, and disappeared into a back room for several minutes. When he returned, Koontama presented Meyer with a gift: a beautifully hand-crafted Didjeridu painted with a platypus. Koontama then told Meyer this story:
"Once there was a water rat named Bilargun. While he was out hunting one day, he saw Daroo the duck, and decided that he wanted her as his wife. He silently swam underneath the water and grabbed her legs, and then took her back to his hole in the bank- his home. There he made her very comfortable and brought her food every day. Eventually, Daroo came to love Bilargun and they were very happy. Some time later,  Daroo had some babies, and what do you know, they had Daroo's bill and webbed feet, and Bilargun's fur coat and a flat tail. This is how the Platypus came to be."

Koontama explained that making music with this Didjeridu, Meyer would be tapping into his own Dreamtime ancestor Platypus."Make music with this Didge, Meyer. While the Jewish and Aborigine cultures are very different, they both have stories to tell. Tell them with this, and one day, you will have united our worlds just like Bilargun did with Daroo." Meyer took the story to heart and began writing music. Traveling around the world, he brings his Didjeridu everywhere with him. Playing music with roots in Aboriginal Australia and the spirit of the Hebrews, Meyer hopes that one day, he too can create his own platypus.